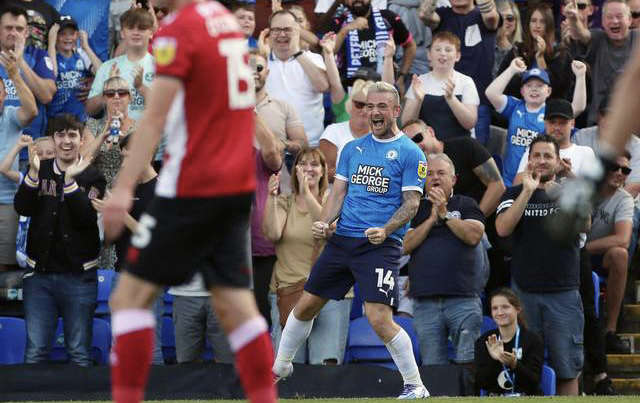 Prior to Tuesday’s EFL Trophy defeat to Crawley, Pompey had gone top of League One after beating Port Vale by a goal to nil away from home. It’s a return to league action for the Blues this weekend, and a chance to extend their lead at the summit.

Peterborough United are the visitors to PO4 for matchday number 7 of this League One campaign.

Danny Cowley’s side remain unbeaten in the league so far and will be looking to remain top of the table come 5pm on Saturday.

Northern Irishman Grant McCann is back in charge of The Posh, returning for his second stint at the helm, having previously occupied the London Road dugout between 2016 and 2018.

Since then, the 42-year-old had gone on to lead both Doncaster Rovers and Hull City, leading Donny to the League One Play-Offs and Hull to promotion to the Championship, as champions of League One in 2021.

McCann was dismissed on Humberside with Hull sat 19th in the 2nd tier, following a takeover from a Turkish consortium who had alternative plans for the club going forward.

He returned to manage Peterborough a month later, after they had sacked McCann’s predecessor Darren Ferguson.

We focus our attention this week on Peterborough’s number 14, Jack Marriott.

The 27-year-old attacker has been with the club since his arrival from Derby County last summer. This is Marriott’s second spell with the club, having previously represented The Posh during the 2017/18 season, before moving to Pride Park.

So far this term, he has found the back of the net on 3 occasions in League One - That’s just 6 shy of the tally of goals he managed in the Championship last season.

Inevitably, Peterborough’s leading scorer at this stage is, you guessed it: Jonson Clarke-Harris.

The forward has so far managed 5 league goals upon the club’s return to League One and is therefore at this stage the leading scorer of the division.

Pompey’s Colby Bishop is second on that list with 4 strikes under his belt.

28-year-old Clarke-Harris has been with the club since the summer of 2020 and was named the League One top goalscorer following the conclusion of his maiden season at the club, bagging 31 goals throughout Peterborough’s surge to finish in the automatic promotion spots in 2021.

The Jamaican international wears the number 9 shirt for The Posh.

Despite sitting 4th in the league at present, Grant McCann’s side have not enjoyed life over the past couple of weeks.

Since their most recent win, a 4-0 drubbing of Lincoln City on August 20th, Peterborough have recorded three consecutive defeats.

This barron run began with a 1-0 loss away at Stevenage in the Second Round of the Carabao Cup, 4 days before throwing away a 1-0 lead at Derby to eventually be defeated 2-1.

The Posh conceded in the 88th and 91st minutes during that game at Pride Park and were also reduced to 10 men, with former Blues defender Nathan Thompson sent off following a culmination of two yellow cards. He will therefore miss this weekend’s game at Fratton Park.

They then met back up with Stevenage on Tuesday night, this time on home soil and this time in the Papa John’s Trophy… The group stage tie ended 2-1 in Stevenage’s favour with Peterborough once again bottling a 1 goal advantage.

So will it be Pompey who end the weekend still unbeaten in the league, or will Peterborough bounce back and return to winning ways?

All of the unmissable action on Pompey Live, every Saturday from 2pm!