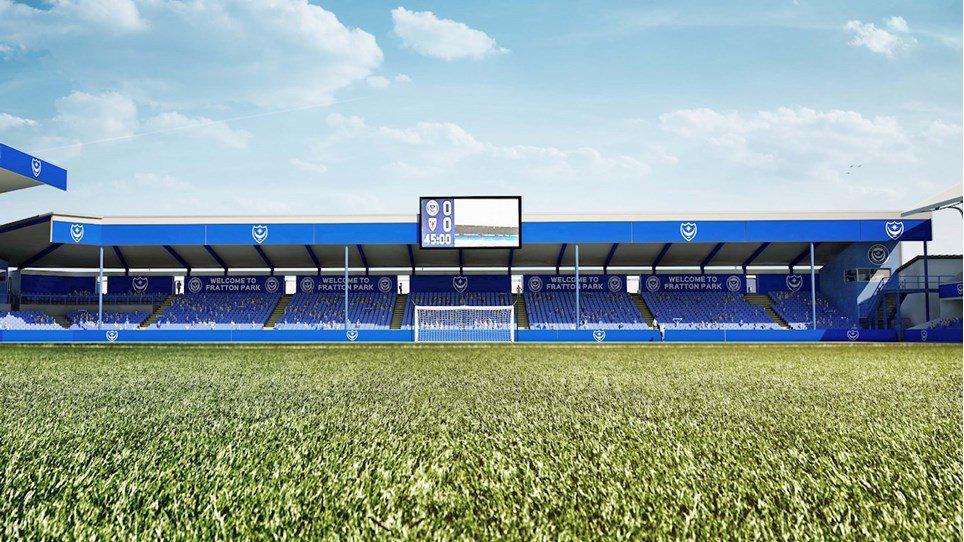 Portsmouth Football Club has today revealed information behind the 1st Phase of the redevelopment of its stadium, Fratton Park.

An artist's impression of the proposed design of a new Milton End shows the club's ambition to keep up with the times and move forward with a sleek, modern twist of the historic old ground.

The decision to finally reveal the plans to Blues fans was reached on Saturday morning at the Tony Goodall Fans' Conference, prior to the home tie against AFC Wimbledon.

In an official statement, a Portsmouth Football Club spokesperson was quoted in saying: "While work continues to address and ensure the safety and security of supporters, as part of the general proposed redevelopment of the stadium - and due to a variety of operational reasons - phase one planning is to be submitted specifically in regard to the Milton End."

"As has been previously advised, while planning is to be submitted for this first phase, there remains issues relating to more general transport and access infrastructure that is outside of the club's control." - the statement goes on to read.

The new Milton End, which will be extensively refurbished as opposed to knocked down to start from scratch, will see its capacity rise to 3,200 - a 45% increase on the current safe working capacity of the stand.

As a result, Fratton Park as an entirety will peak a safe capacity of over 20,000 for the first time since it was reduced due to health & safety concerns during the club's downfall throughout the 2010s.

The ground, which has stood for the entire duration of Pompey's 122-year existence, saw an upgrade to its South Stand last year. At the start of the current league campaign, work started on the listed building, with a new roof, exterior cladding, guttering, lighting and structural steelwork all scheduled to be completed by the end of the season.

Work will then continue on the South Stand throughout this summer... a new, larger television gantry is expected to be in place for the 2020/21 season. 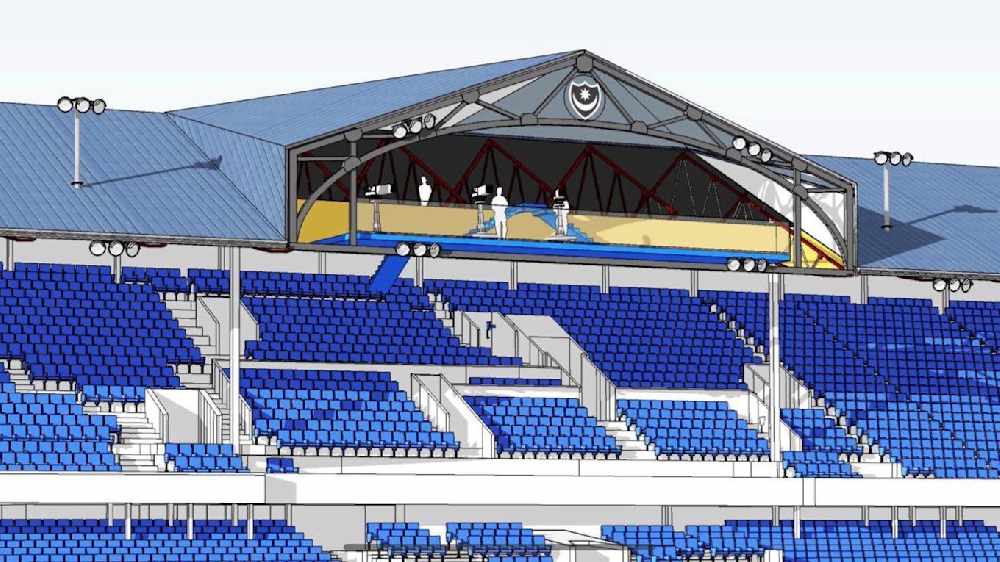 Alongside all of this, the club has slowly started to remove the existing floodlights at Fratton Park and as it stands, only one remains within the grounds of the stadium, with another used as a historical showpiece in the North Stand car park.

New floodlights, which have been attached to the top of all 4 stands at Fratton Park, are now being used to light up the pitch on matchdays.

As of yet, there is no set starting date for work on the Milton End, which will supposedly still be in use for home fans should demand need it. Blocks consisting of 25% of the new stand will be available for Blues fans if away sides fail to sell their respective allocations.

There are currently no areas for disabled fans within the Milton End, however this will be changed in time along with the new plans. When finished, the stand will accommodate for 26 disabled seats - 15 raised and 11 at pitch level. Disabled away supporters will soon be able to join their own fans when visiting Portsmouth!

Additionally, an accessible lift will be installed to provide access to the upper echelons North Stand.

As you can see from the image below, there will be a fully covered, refurbished and extended roof, which will extend on to the corner areas of the stand to link up with both the South and North Stands. 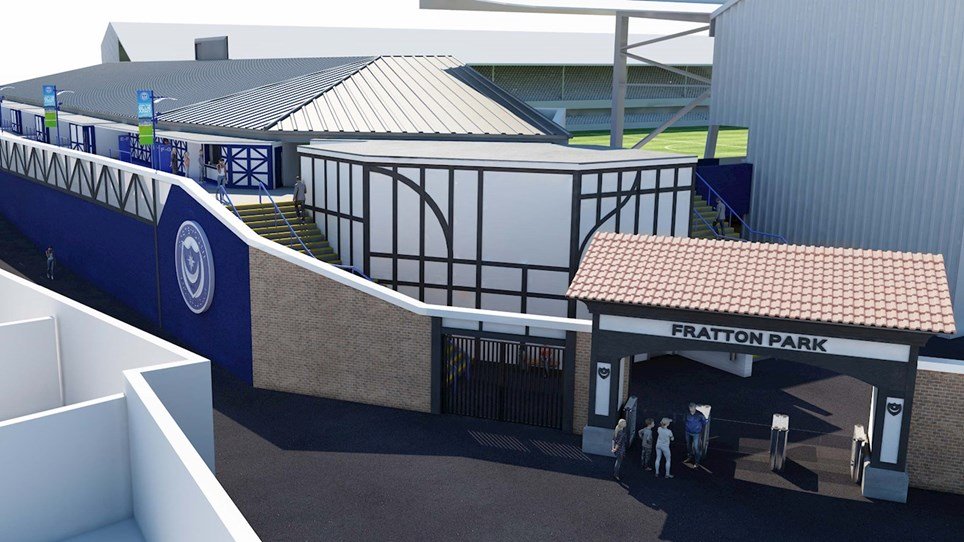 The old, disused Police Box will make way for corner seating and a new Safety and Security Control Hub is going to be installed where the current, also disused, BBC Radio Solent Box is situated between the Milton End and South Stand.

Furthermore, a new PA system, media facilities and additional turnstiles are expected to feature within the new design.

The concourse area behind the stand will also be extended by 125% and on top of the current grass verge which sits behind the stand. Female washroom/toilet facilities will be increased by 180% and the male equivalent will extend by 60% on top of what is currently available.

The entire façade of the new structure will take on a similar Tudor mock design as is, and has been for over a century, displayed at the Frogmore Road entrance of the South Stand. 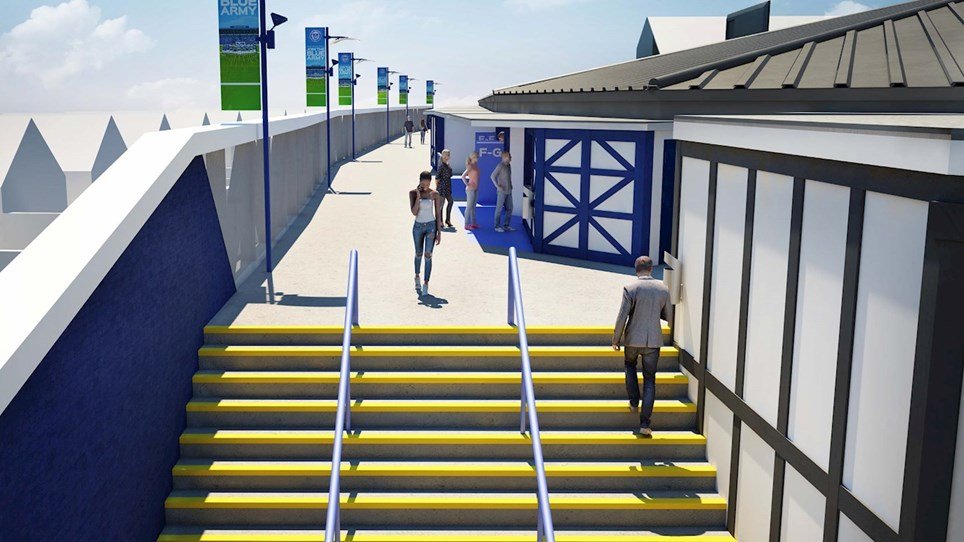 The club has vowed to continue working with external public, private and government bodies in an attempt to "unlock" the commencement of the redevelopment of Fratton Park. We understand that talks are still ongoing with local transport authorities, with terms needing to be agreed to ensure fan safety on matchdays.

A planning application to Portsmouth City Council is set to be sent imminently.

Let us know your opinion of the plans on the Football Hour, this Friday from 6pm.