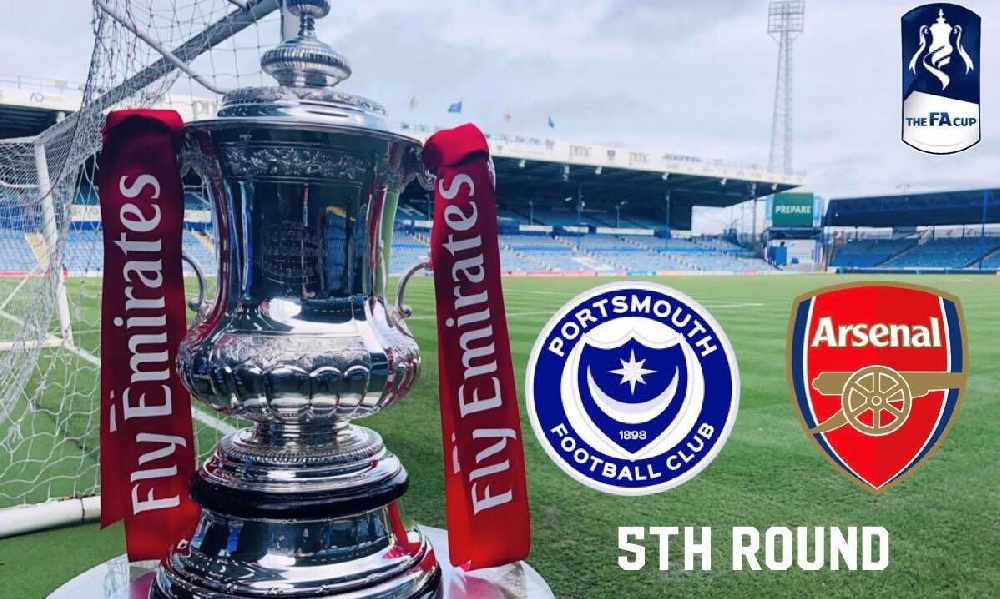 The Blues are into Round 5 of this historic competition for the first time since 2010. Kenny Jackett's side will hope to continue their impressive cup run when they welcome Arsenal to Fratton Park on the week commencing the 2nd of March.

The draw for Round 5 of this season's FA Cup has been made and Pompey were rewarded with a home tie against the winner of Monday night's 4th Round match between AFC Bournemouth and Arsenal at the Vitality Stadium.

Following a routine and professional performance, Arsenal defeated AFC Bournemouth 2-1 away from home to set up a mouth-watering fixture against the Blues at PO4 in March. Pompey had to wait over 2 hours after the draw was revealed to find out exactly who they would be facing at Fratton Park on the week commencing the 2nd of March, due to the game between the two teams being selected for the Monday night TV slot.

The Gunners named somewhat of a changed team against the Cherries, with a blend of fringe and youth lining up in Dorset.

Early first half goals from Bukayo Saka and Eddie Nketiah proved to be the difference between the two sides, despite a 95th-minute consolation scored by Sam Surridge for the home team. Bournemouth seemed to unsettle Arsenal in injury time thanks to that late strike but nonetheless, Mikel Arteta's Arsenal crawled over the line to reach the 5th Round.

Much like last the previous campaign, the Blues are going strong and making themselves known in cup competitions throughout 2019/20 - Portsmouth's record across the Carabao Cup, EFL Trophy and FA Cup this season stands at 11 wins, 1 draw (followed by a penalty shoot-out success) and 1 defeat.

In the 2018/19 season, Kenny Jackett took Pompey on a respectable, and long-awaited FA Cup run. It all started with a 4-0 win at York Road, as National League opponents Maidenhead United turned out to be an easy challenge in the 1st Round in front of the BT Sport cameras. In Round 2, Blues fans were left frustrated with a trip to Rochdale's Spotland Stadium on the cards for the 3rd time in the space of 8 months. Andre Green's stoppage time shot was deflected into the back of the net to send Portsmouth into the 3rd Round for the first time since the 2011/12 Championship campaign. 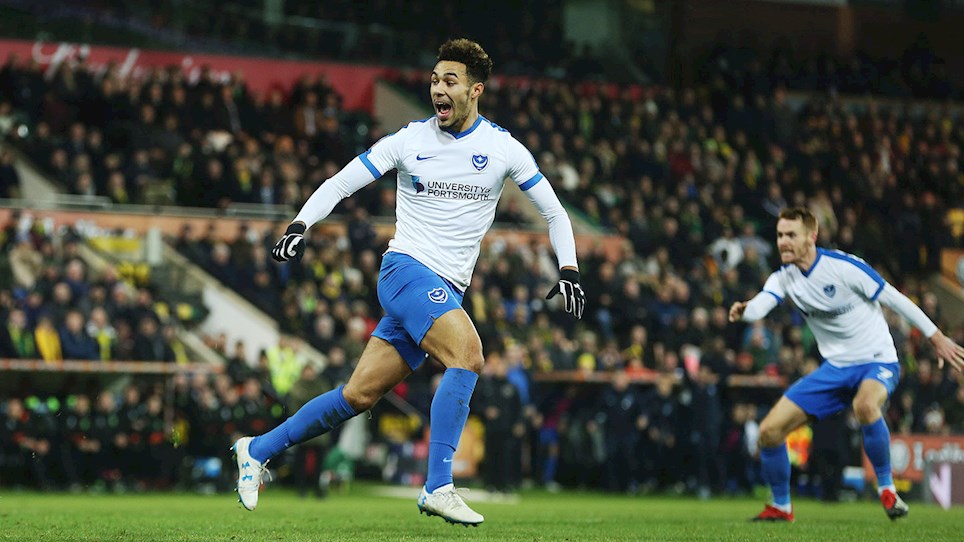 Norwich City's Carrow Road was the destination for the next stage of the competition and it was that man Green again who popped up with the winning goal in added time to send the visiting supporters, and equally the visiting media in the press-box, into total delirium. Who could forget BBC Radio Solent's Andrew Moon's famous piece of commentary? "Andre Green... HE'S SCOOOOOOORRRED!" If you were to search for the word "Scenes" in the dictionary, you would most likely come across that moment.

In the 4th Round, Pompey finally got themselves a home tie but even that one had to be replayed. A 1-1 draw with Championship outfit Queens Park Rangers took the tie back to Loftus Road, where Portsmouth's valiant FA Cup journey came to an end, thanks to goals from Nahki Wells and Matt Smith, which sealed a 2-0 victory for the R's.

This season, the 2008 winners have gone one better and made it through to the 5th Round for the first time since 2010, when they progressed as far as the Final, where they were beaten 1-0 by Chelsea. To reach this stage this time out, the Blues had to overcome two non-league opponents in the forms of Harrogate Town and Altrincham in the 1st and 2nd Rounds - both of those close encounters ended 2-1 in Pompey's favour.

Those wins set up a rather anti-climactic 3rd Round fixture... With all of the Premier League sides entering at this stage, many fans were hoping to take on one of the big boys, but instead it was Fleetwood away for a 5:31pm Saturday evening kick-off. Portsmouth, once again, walked away from this one winning by 2 goals to nil.

As the 4th Round draw approached, it became apparent that despite the chances of drawing one of the bigger teams in 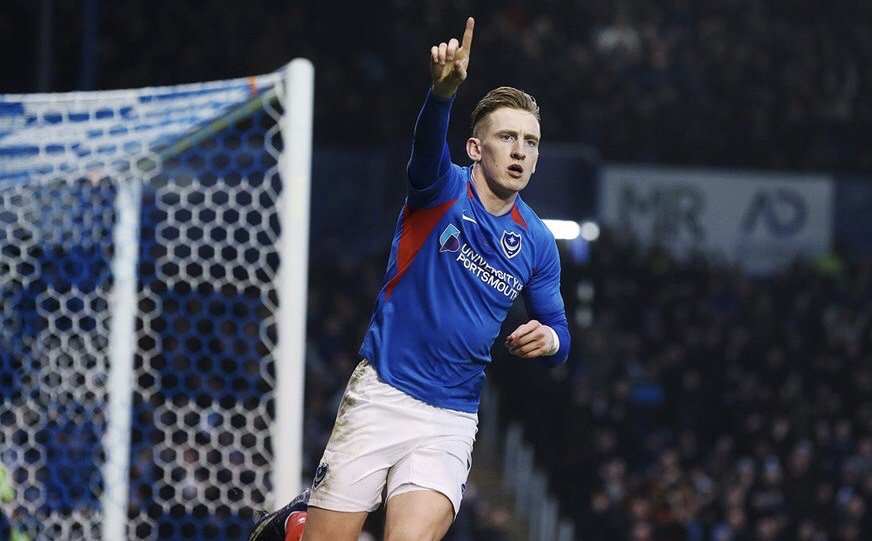 the English game had grown more likely, it would be typical Pompey to avoid all of them and be forced to play a, lets say, slightly less glamourous side. And of course, with Newcastle United, Liverpool and Manchester City all still in the pot as the final 7 or 8 balls were yet to be pulled out of the bowl, a tie at home to Championship strugglers Barnsley was to be the tie for Pompey, who brushed them aside with no qualms.

Goals from Ben Close, John Marquis, Ronan Curtis and Christian Burgess helped Kenny's side to a 4-2 victory at Fratton Park. Goals from Tykes forwards Cauley Woodrow and former Blues striker Conor Chaplin weren't enough to avoid an upset for Gerhard Struber's side, who suffered their 3rd defeat in a row in all competitions.

Saturday's victory over Barnsley has paved the way for a 5th Round tie at home to Arsenal. Pompey will take on the Gunners at Fratton Park on the week commencing Monday the 2nd of March - Blues fans finally get the big cup tie they have been hoping for since the club's demise down the leagues throughout the 2010s.

Now, we don't want to get too carried away here, but in case Kenny Jackett does manage to replicate Millwall's impressive 2012/13 FA Cup run, attached below are some key dates for your diary concerning the final few rounds of this year's tournament:

The aforementioned FA Cup run that boss Kenny Jackett masterminded when in charge of Millwall 7 seasons ago saw the Championship strugglers advance all the way through to the Semi-Finals, where they were beaten 2-0 at Wembley by eventual winners Wigan Athletic. That was a strange season for the competition, with barely any of the so-called "top" teams appearing in the latter rounds. The likes of Everton and Manchester United were knocked out in the Quarter-Finals and Chelsea and Manchester City were drawn against one another in the Semis, meaning that either one of Wigan or Millwall were guaranteed a place in the Final. 2013 truly was the year of the underdog and Kenny Jackett's Millwall so nearly became a relegation-threated 2nd tier outfit who made it all the way. Even Conference side Luton Town managed to reach the 5th Round!

The date for the tie between Portsmouth and Arsenal is set to be announced in the coming days.

Do you think Pompey have what it takes to be able to defeat Arsenal and make it through, against the odds, to the Quarter-Finals of The FA Cup? Let us know all your thoughts on the draw and Pompey's chances in the match by tuning in and getting involved with The Football Hour, every Monday and Friday from 6pm - only on 93.7 Express FM, DAB Digital Radio & Online at expressfm.com/player!