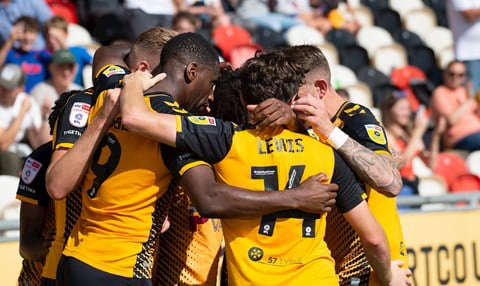 After a 3-1 win over Bristol Rovers at the weekend, it’s time for Pompey to turn their focus away from league matters. The Carabao Cup Second Round awaits and it’s South Wales the destination once again for the Blues.

A 3-0 victory over Cardiff City in the First Round a fortnight ago set Danny Cowley’s side up for a tie with League Two outfit Newport County.

These two teams have not met for over 5 years until now - That game in March 2017 ended 2-1 in Pompey’s favour with Kyle Bennett and Kal Naismith on the scoresheet at Fratton Park.

The club are managed by Newport-born James Rowberry, who took over in the dugout in October 2021.

Rowberry took over from caretaker manager Wayne Hatswell with the side 13th in League Two after 13 matches. Hatswell had been handed the reins for a few weeks following the departure of Michael Flynn on October 1st.

Since taking over at his hometown club, who handed him his first ever managerial job, 37-year-old Rowberry has overseen 41 competitive matches, of which 17 have ended in victory and 16 in defeat.

Our player to keep an eye on this time around is young AFC Bournemouth loanee Nathan Moriah-Welsh.

The 20-year-old Guyana international made his debut for the Cherries in a 3-1 win away at Yeovil in The FA Cup back in January and was part of the Bournemouth side that reached the FA Youth Cup Quarter-Finals back in 2019.

Moriah-Welsh, who plays in midfield, made his Newport debut off the bench in last Tuesday’s 3-1 defeat to Salford City at Rodney Parade before starting against Tranmere Rovers at the weekend.

He would go on to score in that game - His first professional goal in English football.

Former Blues striker Omar Bogle now wears the Amber strip of Newport County as is their leading scorer at this early stage of the campaign.

The 29-year-old spent the second half of the 2018/19 season on loan at Fratton Park from Cardiff City, making an instant impact before fizzing out into mediocrity, scoring 4 in 12 matches for Kenny Jackett’s side.

Since making the permanent move to Newport from Hartlepool United this summer, the ex-Grimsby and Wigan forward has found the back of the net on 3 occasions, making him the joint 4th leading scorer in League Two.

James Rowberry’s side are currently 19th in the basement division of the English football league, with just 1 win, 1 draw and 3 defeats to their name so far this season.

That sole league victory did however come in their most recent match, defeating Tranmere Rovers by 2 goals to 1 on home soil at the weekend.

To reach this stage of the competition, The Exiles saw off Championship opponents Luton Town at Kenilworth Road on August the 9th, coming from behind twice to claim a 3-2 win and their place in the Second Round.

It’s Newport County versus Portsmouth - Who will make it through to the 3rd Round of the Carabao Cup?

All of the unmissable action will be right here on Pompey Live from 7 O’Clock this evening!