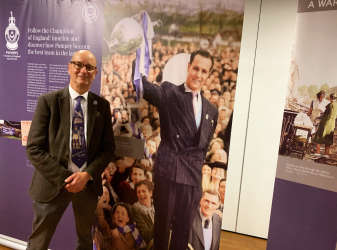 A breathtaking tribute to Pompey's 1949 & 1950 top flight winning campaigns has been unveiled at Fratton Park.

On Friday the 15th of October, the Pompey History Society (@PompeyHistory) invited guests and press to the Victory Lounge at Fratton Park to take a first look at a new feature at Portsmouth Football Club's historical home.

The Pompey History Society is a self-funded organisation which was set up by Portsmouth supporters with the aim of preserving the football club's rich history at a time of uncertainty. Whilst affiliated with and recognised by the football club, the Pompey History Society is NOT governed by Portsmouth FC. Money generated and projects run are funded by generous donations from the public and successful lottery grants.

The main attraction of t 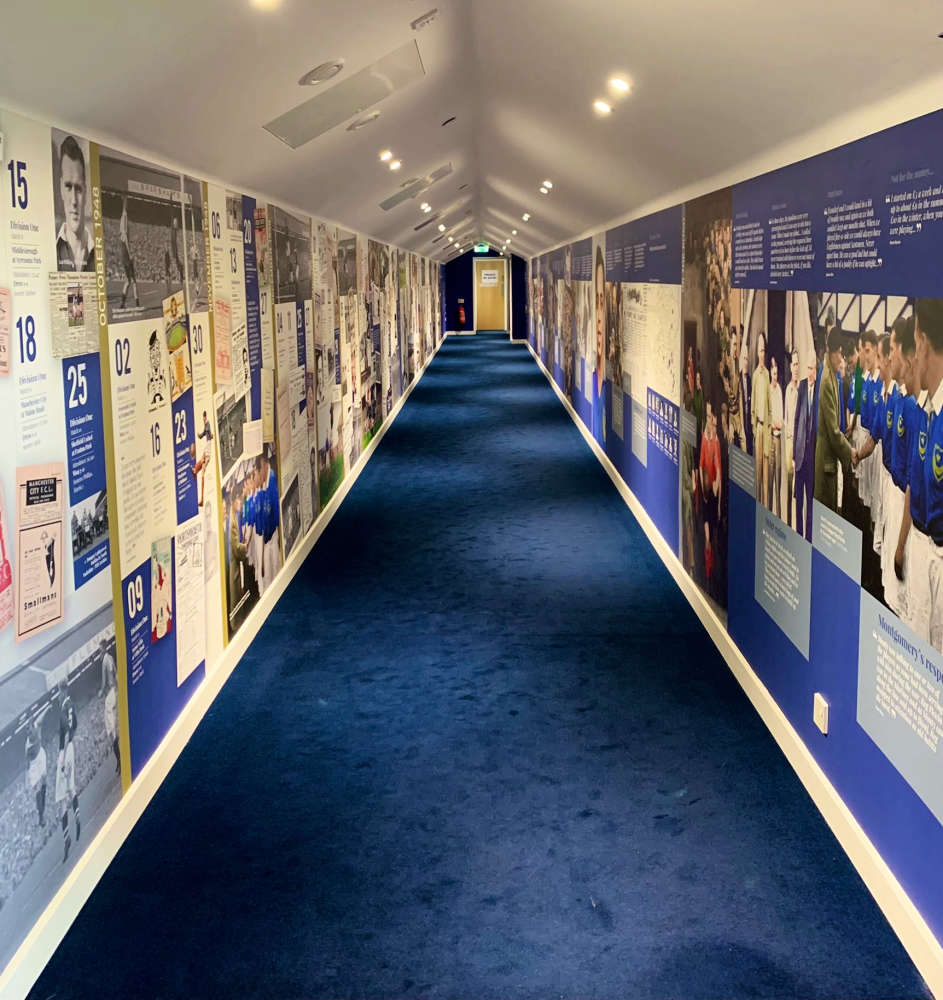 his project is a long corridor connecting the corporate & VIP lounges to the concourse in the South Stand, which has been redecorated to commemorate the Blues' success in winning England's First Division back-to-back in 1949 and 1950.

Photographs previously only seen in black & white have been purchased and restored in colour, plastered on the walls of this South Stand corridor alongside quotes from supporters, former players and families of those unfortunately no longer with us.

Pompey History Society's project was completed in association with Portsmouth FC, the University of Portsmouth and The News, with generous financial support from the Lottery Heritage Fund. University Vice Chancellor Professor Graham Galbraith was among the attendees at PO4, alongside Editor of The News Mark Waldron, Chief Sports Writer Neil Allen and Express FM's Football Hour host Jake Smith.

Club legends such as Alan Knight and Ray Crawford were also present to witness the unveiling of the exhibition, which also included the reveal of a replica trophy similar to the silverware won by Pompey for winning the top flight titles in '49 and '50. 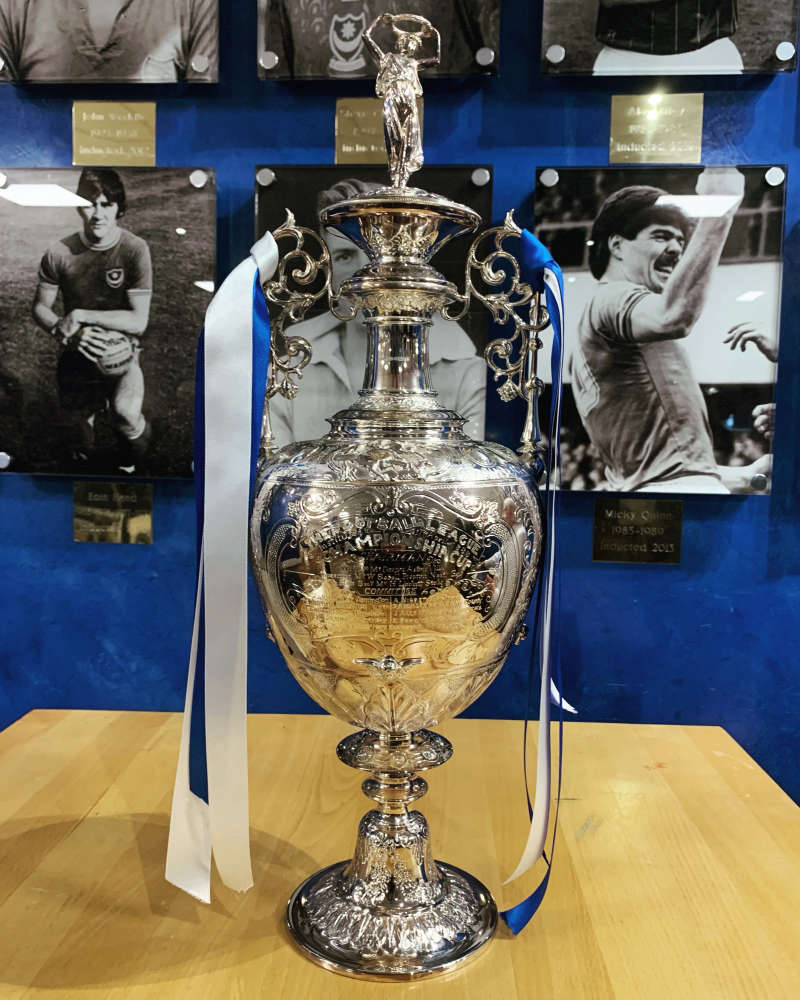 You can take a listen to the full interview with Colin here:

As well as the invited guests, members of the local media and families of former players present at Fratton Park for the launch, there was also a small presence of journalism students from the University of Portsmouth, who had been welcomed along to be part of the day and gain valuable learning experience.

One of those students was Lauren Cox (@UoP_Lauren), who spoke to us about the importance of the event and the legacy it will leave for those willing to one day learn about Pompey's proud past. 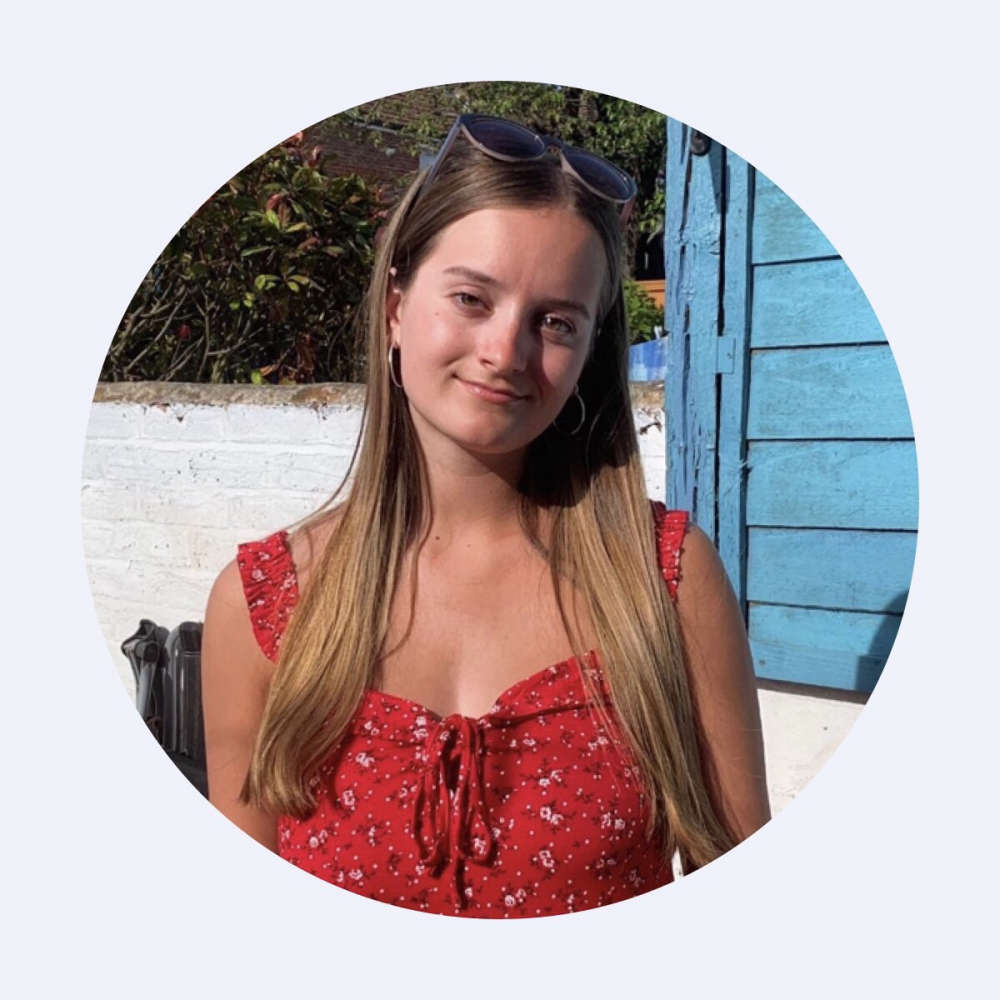 "It's so important to preserve local history so that future generations are able to experience and celebrate it for years to come, by sharing stories and facts with their community.

"The Pompey History Society put a tremendous amount of work into putting this project together, despite setbacks from the pandemic. It's amazing what they have achieved and how they were able to share the stories of so many local Pompey fans and former players through the exhibition." - Lauren continued.

She ended by saying: "So many local residents support Portsmouth Football Club, so it's important that the club is able to reach its supporters through projects like this one. The project allows fan to access interesting parts of history about the club and it also gives them an opportunity to feel more connected to their team."

Express FM would like to take this opportunity to thank Colin Farmery and the Pompey History Society for inviting us to the exhibition, as well as for doing a phenomenal job in maintaining the club's proud history for all generations, past, present and future, to enjoy!