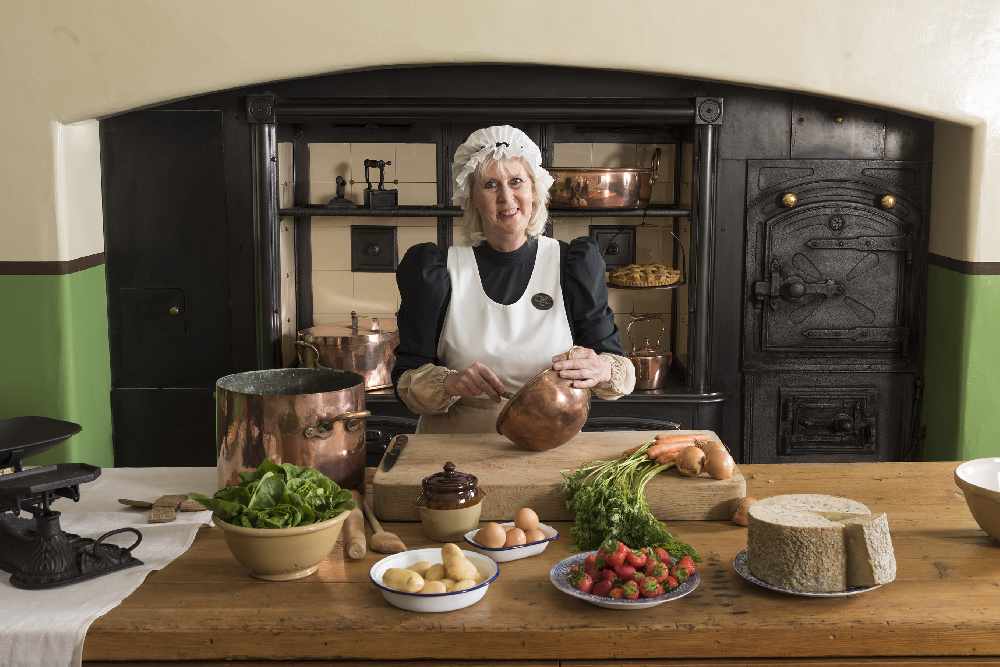 In an exciting project for 2017 Beaulieu has opened the newly restored Victorian Kitchen at Palace House, the ancestral home of the Montagu family.

The original kitchen from the Victorian era dated from Henry, 1st Baron Montagu’s enlargement of the house in the 1870s and remained in use until the early 1950s, when it was gutted to make way for a motorcycle display. That kitchen has now been restored to working order and has been opened for visitors to Beaulieu.

Before work could start, an extensive search of the archives and appeal for information was carried out in order to make the restoration as accurate as possible. Only one photograph of the original kitchen existed and showed Annie Louise Freeman at work with two unidentified kitchen maids c.1905. They are seen working at the same table which occupies the centre space of the kitchen today.

To help with the new kitchen’s authenticity, food historian Dr Annie Gray – presenter of BBC2’s Victorian Bakers, a regular panellist on BBC Radio 4’s The Kitchen Cabinet and author of The Greedy Queen: Eating with Victoria – has been an advisor on the Beaulieu project.

Dr Gray and Lord Montagu’s cook Dena Saunderson will be preparing Victorian dishes for guests at the launch of the new Victorian Kitchen. Visitors will also be able to see Dena dressed in her Victorian cook’s costume and preparing dishes during the school holidays as part of Beaulieu’s living history. Her homemade cakes, biscuits and preserves will also be on sale in the adjoining shop.

Dr Gray said: "I’m thrilled to have the opportunity to work alongside Beaulieu’s cook in the renovated Victorian Kitchen. Having seen it before, I can’t wait to get stuck into the ‘after’, with some dishes Queen Victoria would have loved."

Lord Montagu said: "The kitchen is the heart of many houses, and I want to create that same feeling in Palace House. Having the smell of freshly baked bread wafting down the corridors – which will be eaten later by the family – will help to remind people that the house is lived in and not just a timepiece."

Palace House Manager Chris Morley scoured the country for a working Victorian range to cook with. The one he found, a Carronette double oven range dating from about 1880, is probably very similar to the type which would have produced meals for several generations of the Montagu family and their household staff. When the range was fitted, a large quantity of soot came down the chimney which must have been sitting in the flue since the kitchen last worked in 1951.

The original bell board has been has been put back in pride of place above the kitchen fireplace. Each of the 35 bells had a different tone so that servants could differentiate one bell from another and recognise the room from which the call was coming without having to look up.

The kitchen has been lined with shelves bearing copper pans and utensils from the Victorian era. Most striking is the massive replica dresser which has been made by Beaulieu’s skilled craftsmen after carefully examining old photographs.

The room’s colour scheme of green, brown and cream was adopted after traces of the original paint was found under layers of subsequent re-paints.

A menu board is written up daily from the kitchen diary of 1889. The details include what was served in the main house and the servants’ hall, together with the names of family and house guests expected at the table.

A Servants in Victorian Palace House display also shows the hierarchy of the servants, from the butler at the top to the scullery maid at the bottom. Interesting characters featured in the display include Pleasants, Lord Henry’s long-serving butler who often wore a red Egyptian fez he had been given by Lord Montagu. Also featured is Miss Clarke, the governess to Lord Montagu’s daughter Rachel. Both servants are recorded in the 1881 census and Miss Clarke later signed the visitor book when she returned for a visit to Beaulieu.

To accompany the opening of the Victorian Kitchen, Lord Montagu has published a new edition of the book To the Manor Born, which was compiled by his mother Belinda, Lady Montagu and includes recipes and remedies from the family archives.

The book gives a fascinating insight into the running of an English household two centuries ago with recipes for dishes that have completely disappeared from the table of today. These include Viper Broth, Oyster Sausages, Hartychoke pye with Marrow and Quaking Pudding. There is also advice on grafting orange on holly trees and a wash for reviving purple in silks and ribbons. The book concludes with a chapter of contemporary family recipes such as Grey Mullet on Toast, Roast Haunch of Venison with Chocolate Sauce and Banana Flambée Montagu. To the Manor Born is available from the Beaulieu kitchen shop or by mail order, price £9.99.