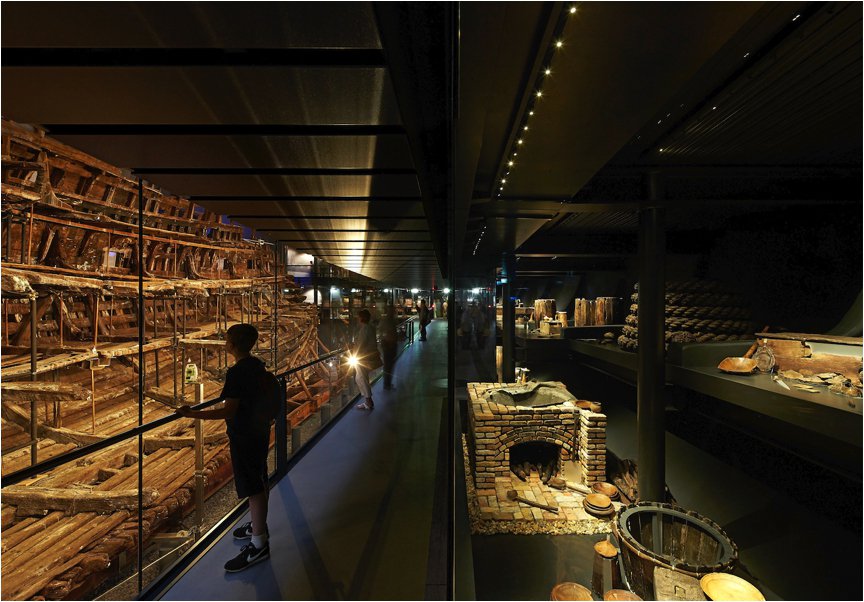 The Mary Rose made it to the finals of the European Museum of the Year Award (EMYA), taking part in the exciting awards ceremony held at the POLIN Museum of the History of Polish Jews.

The EMYA recognises excellence in the European museum sector and encourages innovative approaches in the museum world.

Helen Bonser-Wilton, Chief Executive of the Mary Rose Trust, says: “We are thrilled to have made it to the finals of these prestigious awards against intense competition, only three years after winning a Special Commendation, and delighted that Mary Rose is recognised as a world-class museum.”

The Mary Rose underwent a complete revamp in 2016, with views of the ship opened up from all three decks and nine galleries through full length glazing.  On the Upper Deck, visitors pass through an airlock and breathe the same air as Henry VIII’s flagship. To bring the ship to life, state of the art projections of the crew were introduced, showing them going around their everyday lives in wartime and peacetime.

The Mary Rose provides a unique and immersive journey into Tudor Life, with all the sights, smells and sounds of life in England in the reign of Henry VIII. The stories of individual crew members are presented through thousands of personal possessions and professional tools.  Visitors experience interactive displays, artefact handling and live action events too.

The Mary Rose is rated as the Number One Attraction in Portsmouth on TripAdvisor, where comments such as ‘breathtaking’, ‘astonishing’ and ‘spellbinding’ are regularly received.

Annual adult tickets for Mary Rose are priced at £16 (less for children and concessions) and family tickets are also available. Tickets can be bought from the Mary Rose Visitor Centre and Museum. A 10% discount applies to tickets bought online at www.maryrose.org.

Portsmouth Historic Dockyard tickets bought after 30th March 2018 do not include admission to Mary Rose and Mary Rose tickets cannot be bought from the PHD Visitor Centre.