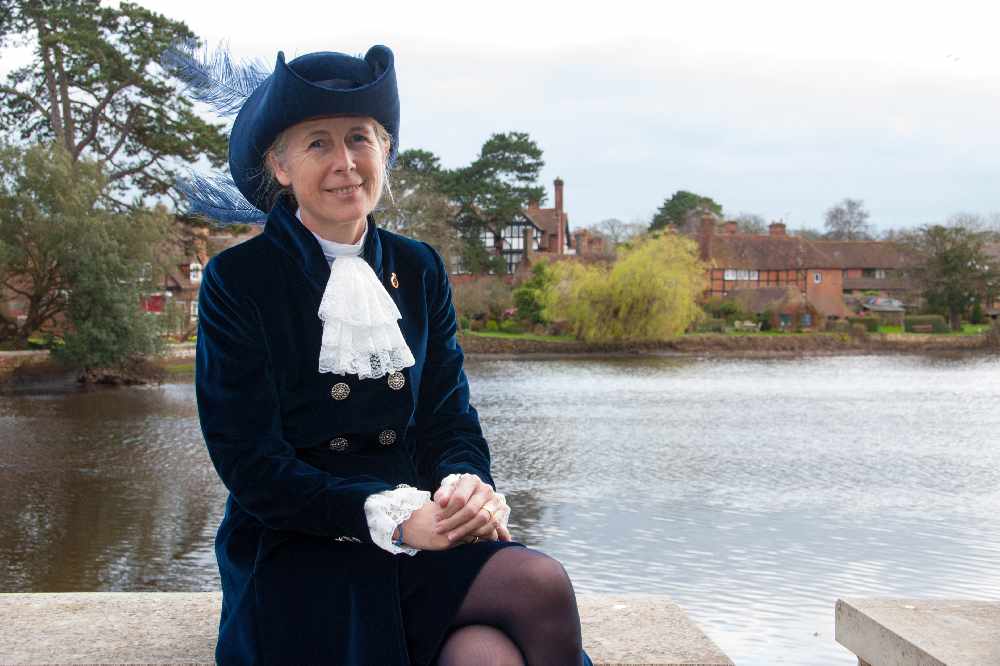 The Hon. Mary Montagu-Scott is honoured to have started her year in office as the new High Sheriff of Hampshire supporting those involved in law and order across our county.

The ancient role of High Sheriff, which is well over 1,000 years old, is entirely voluntary and non-political and lasts for only 12 months.

This ceremonial role is to support the judiciary, police and prison service as well as promote crime prevention and education and the many voluntary organisations which work in the sector. All counties across England and Wales have a High Sheriff, who is selected for the role by a panel from their communities.

Mary Montagu-Scott, the sister of Lord Montagu of Beaulieu, recently signed her declaration to High Court Judge the Hon. Mr Justice Warby in the Winchester Law Courts to an assembly of court officers, judges and guests. Her ceremonial blue velvet frock coat was made by seamstress Ann Scott from Beaulieu.

She said: "I am so looking forward to the year ahead and having the privilege of meeting so many interesting and dedicated people working in law and order in our great county. I have decided not to pick one theme for the year but to help as many organisations as much as possible throughout my term in office."

To mark the start of her year, Mary will host The 999 Show at Beaulieu on Bank Holiday Monday May 29th to celebrate the work of the emergency services and provide a fun day out for their families. The police, fire and rescue, ambulance, judiciary, coastguard, National Health Service and prison and probation services have all been invited to join the show in the grounds of the National Motor Museum.

A feature of the event will be Community Speedwatch demonstrations, which will bring history full circle as Mary’s grandfather and pioneering motorist John, Lord Montagu was issued with one of the earliest speeding fines more than a century ago for ‘unlawfully driving a light locomotive at a greater speed than twelve miles an hour’ in 1902. John, Lord Montagu was fined £1 with 12 shillings costs after being caught by an officer in plain clothes riding a bicycle. When he became the New Forest Member of Parliament the following year, he went on to promote a bill which raised the speed limit from 12 to 20 mph.

At The 999 Show the Community Speedwatch team will be monitoring the speeds of a diverse selection of vehicles as they trundle around the grounds of the National Motor Museum, ranging from a Victorian Penny Farthing bicycle to a veteran car.

Also at the show will be a CSI Beaulieu murder mystery at Palace House, the ancestral Montagu family home, where visitors can find out from Specialist Operations Regiment, Royal Military Police forensic investigators how to hunt for clues, dust for fingerprints, collect evidence and photograph the scene of a crime.

There will also be a VIP kidnap, emergency services extrication display, military band performances by the Rifles Band Winchester, police dogs and horses and a New Forest Agisters’ pound, as well as a display of historic emergency services vehicles for motoring enthusiasts.

As well as taking on her new role, Mary Montagu-Scott is also Chairman of the New Forest Ninth Centenary Trust charity, which runs the New Forest Centre in Lyndhurst, and a trustee of the International Boatbuilding Training College Portsmouth Charity, New Forest Show Society and National Motor Museum Trust Charity. She is also Commodore of the Beaulieu River Sailing Club and sits on many local community committees.