Power goes out at the Guildhall 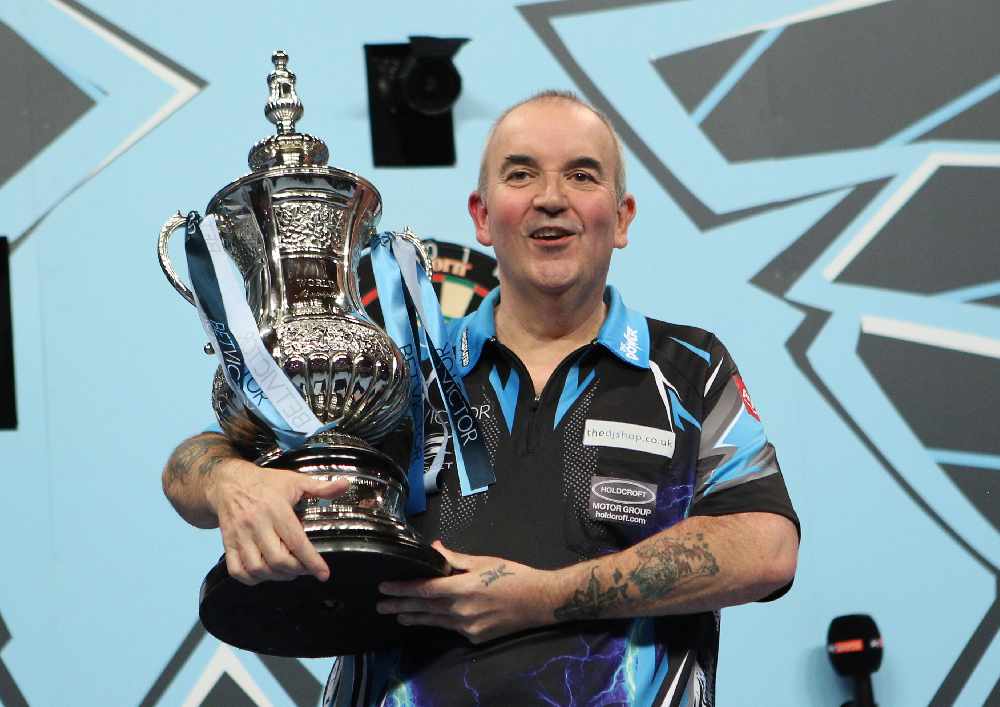 Phil 'The Power' Taylor, who made his last appearance in Portsmouth as a professional player at The DJ Shop Untouchables

16-time World Darts Champion Phil 'The Power' Taylor appeared in Portsmouth at the weekend for the last time as a professional.

The 56 year old, who is widely regarded as the greatest Darts player of all time, starred in an exhibition event at the Portsmouth Guildhall on Saturday night.

Over 1200 people contributed to a bustling atmosphere at the Guildhall, with the Pompey crowd treated to the best in the business at The DJ Shop Untouchables 2017.

The event, which goes from strength to strength each year, was again excellently staged by Waterlooville-based company MODUS Sports.

The Power was among a host of big stars from the world of Darts, with current world number one and reigning PDC World Darts Champion Michael van Gerwen also featuring.

Richard North kicked off the knockout-style tournament, up against Portsmouth's own darts stalwart Andy Jenkins. In his 25th year as a professional, Jenkins was looking for victory in his home city, but fellow Hampshire player North claimed the win as he continues to enjoy his breakthrough year.

Isle of Wight local Keegan Brown tried his best to gee up the crowd, with rumblings of Play up Pompey and Blue Army beginning to emanate from sections of the crowd on the same day Portsmouth beat Charlton Athletic 1-0 in Sky Bet League One.

Mark Webster, Vincent van der Voort, Steve West, and Simon 'The Wizard' Whitlock were also all in action, with Australian ace Whitlock calling Waterlooville his home when not Down Under.

Sky Sports MC John McDonald was on master of ceremonies duty and expertly conducted the bumper crowd with his usual exuberance, while the lungs of ever-professional referee Huw Ware were kept warm as he belted out 180 after 180.

Local competition winner Matthew Clements also got to enjoy the bright lights of the Guildhall stage, winning the opportunity to play a leg against the 'King of Bling' Bobby George - the embellished Darts legend performing his trademark walk on to the sound of Queen's 'We are the Champions', seemingly stopping for a selfie with every member of the crowd on the way.

But the night culminated with a showdown between the best player on the planet and the greatest player of all time, as Michael van Gerwen met Phil Taylor.

Although only an exhibition event, there was real competition between the two, further accentuated with the 2018 PDC World Darts Championship a matter of days away.

It was the Dutchman who pulled the plug on The Power however, winning The DJ Shop Untouchables event for a sixth consecutive year, marking the last time that a Portsmouth crowd will see Phil Taylor perform in the city as a professional.

The 16-time world champion is retiring from the sport after his 29th and final PDC World Championship, which begins on 14th December.

Although he will be still be performing in exhibitions in 2018, Taylor has decided to put the tungsten away for good in a professional capacity, and those in attendance at the Guildhall may well have been witnesses to the proverbial passing of the torch with Michael van Gerwen expected to take on the mantle.

It's not so much a goodbye, but a see you later from a darting legend.