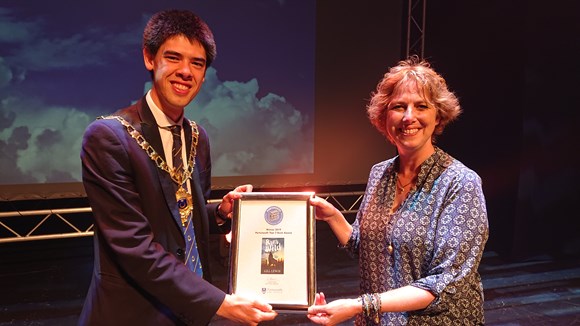 The winner of the Portsmouth Year 5 Book Award 2019 was announced at an extremely lively ceremony at the Kings Theatre on Tuesday 25 June.  The Deputy Lord Mayor, Councillor Ben Dowling and Deputy Lady Mayoress congratulated Gill Lewis, whose book, Run Wild was voted favourite from a shortlist of five books by over 1500 year five pupils from twenty-four schools in the city.

Portsmouth's Year 5 Reading Champions, pupils from Cottage Grove Primary and St. Swithun's Catholic Primary School, were also recognised during the ceremony.  All the primary schools make a nomination for a pupil who is an avid reader and enthuses others around them to love books and reading as well.

Children were also given the chance to nominate an 'Inspiring Adult', someone in their school who has helped and encouraged pupils to develop a love of reading.  Mrs Sawdy from St Paul's Catholic Primary School received the prize, which is given in memory of the late Mrs Jean Fray, who was Librarian at Arundel Court Academy.

Portsmouth School Library Service runs an annual Book Award and Reading Champion competition across three age groups to promote a love of reading: Year 1s vote for their favourite Picture Book; Year 5s for a short novel and Year 8/9s for a longer novel.  In separate events, the winner in the Picture Book category was revealed as Simon Sock by Sue Hendra, Paul Linnet and Nick East.  Boy 87 by Ele Fountain won the prize for the longer novel.

Caroline Prince, Advisory Librarian at Portsmouth School Library Service said of the Reading Champions: 'We were delighted that so many pupils had been nominated this year.  In the end, we can only give the prize to two winners and we felt they had done such a fantastic job of sharing their love of books and reading with other pupils in their schools.'

David Percival, Outreach and School Library Service Manager said of the winning author: 'Gill Lewis was a runaway winner this year from a fantastic shortlist.  Portsmouth pupils had to choose their favourite book from four very different titles but they were really wild about this great story'.

At the celebratory event at the Kings Theatre a number of schools gave performances inspired by the winning book: Pupils from St. Paul's Primary performed a drama; Cottage Grove Primary School sung a song and pupils from Arundel Court Academy performed a poem.

There's also an art competition linked to the Award and a selection of the drawings and paintings were shown at the celebration with six of the best artists awarded prizes.

The School Library Service has a number of programmes which aim to get pupils reading for pleasure and create opportunities for them to meet published authors and celebrate books.