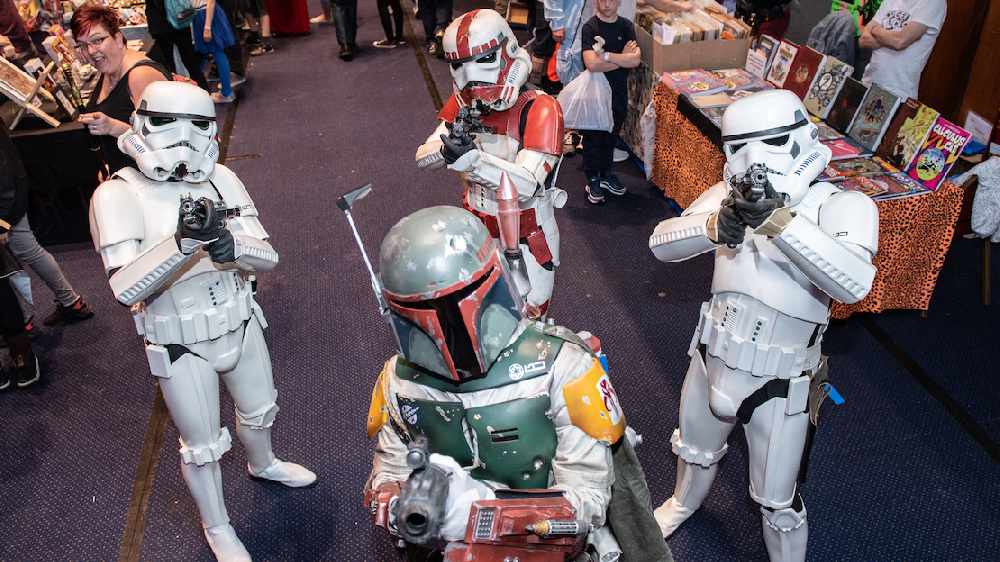 Portsmouth Comic Con 2019 is coming. And it’s even bigger and better than last year!

Portsmouth Comic Con - International Festival of Comics 2019 is continuing to add fantastic names, activities and events from the world of comic, film, TV and pop culture entertainment to this year’s line-up, which follows hot on the heels of the success of the inaugural event in 2018.

Taking place at Portsmouth Guildhall on 4th-5th May 2019, Portsmouth Comic Con, produced in partnership with Tripwire Magazine and GoGeek Events, will welcome some of the greatest artists and writers in the industry from across the world, alongside stars of the screen and the world of cosplay. If you’re serious about comics, love Marvel films, Star Wars and cult series like Dr Who, or you’re simply looking for a family fun day out, this is the event for you!

This year’s Comic Con will explore the science of comics through a range of panels, exhibitions and displays. There will be the opportunity to pay homage to the legend that is Stan Lee by joining Lee’s right-hand man, Roy Thomas, with his seminal Marvel counterpart, Steve Englehart, as they reminisce about their time with the legend who revolutionised the comic world and defined popular culture as we know it. Alongside this, there will be an opportunity to see and buy a number of signed limited edition artworks inspired by Stan Lee and created by Alex Ross, in a special exhibition held in partnership with Bournemouth’s Westover Gallery.

This year’s Comic Con will also be celebrating Batman’s 80th birthday with a unique exhibition that showcases the Dark Knight's evolution and development from his first appearance in 1939 through to the modern day, in a fascinating collection of high-resolution reproductions.

The Guildhall is delighted to welcome GoGeek Events as a partner to this year’s Con as they run the Carnival of Cosplay stage, where adults and children can amaze with their creativity and imagination in daily competitions that celebrate the diversity and inclusivity of the spectacular world of cosplay and costuming. A host of guest cosplayers including Elmo Spike, Jax Parrow and Ironman will feature alongside a range of GoGeek’s own Icons.

The University of Portsmouth’s emerging student talent with will be on hand to help visitors of all ages explore virtual reality, motion capture, screenings, game demos, robots and more in a showcase of state-of-the-art technology. There will also be the opportunity to experience VR Motion Simulators and gaming with Novatech, the official sponsor and one of the largest retailers of computer products in the UK.

The Interactive Zone will enable games fans to have some fun, offering over 40 years of gaming, from Pong to Pac Man and Mario to Minecraft, with an unbeatable selection of consoles from Portsmouth’s Game Over, while Dice Portsmouth offers hundreds of exciting board games from family classics to modern hits.
The Wonder Zone will take visitors behind the scenes of film and TV with a fascinating range of displays, props and costumed characters from cult series including Dr Who and a remarkable selection of screen accurate Star Wars props from The Isle of Wight Prop Crew.

The Gosport Steampunk Society will this year be pitting themselves as the Heroes of the Resistance in a War of the Worlds to protect Portsmouth against Martian Invaders and indulge in the magnificent and Steampunk staple, Tea Duelling.

Tickets with an Early Bird discount are available until the end of February, after which time the prices will rise. A sell-out event in 2018, people are advised to book early to avoid disappointment at www.portsmouthcomiccon.com or 0844 847 2362 (calls cost 7p per minute + phone company access charge).