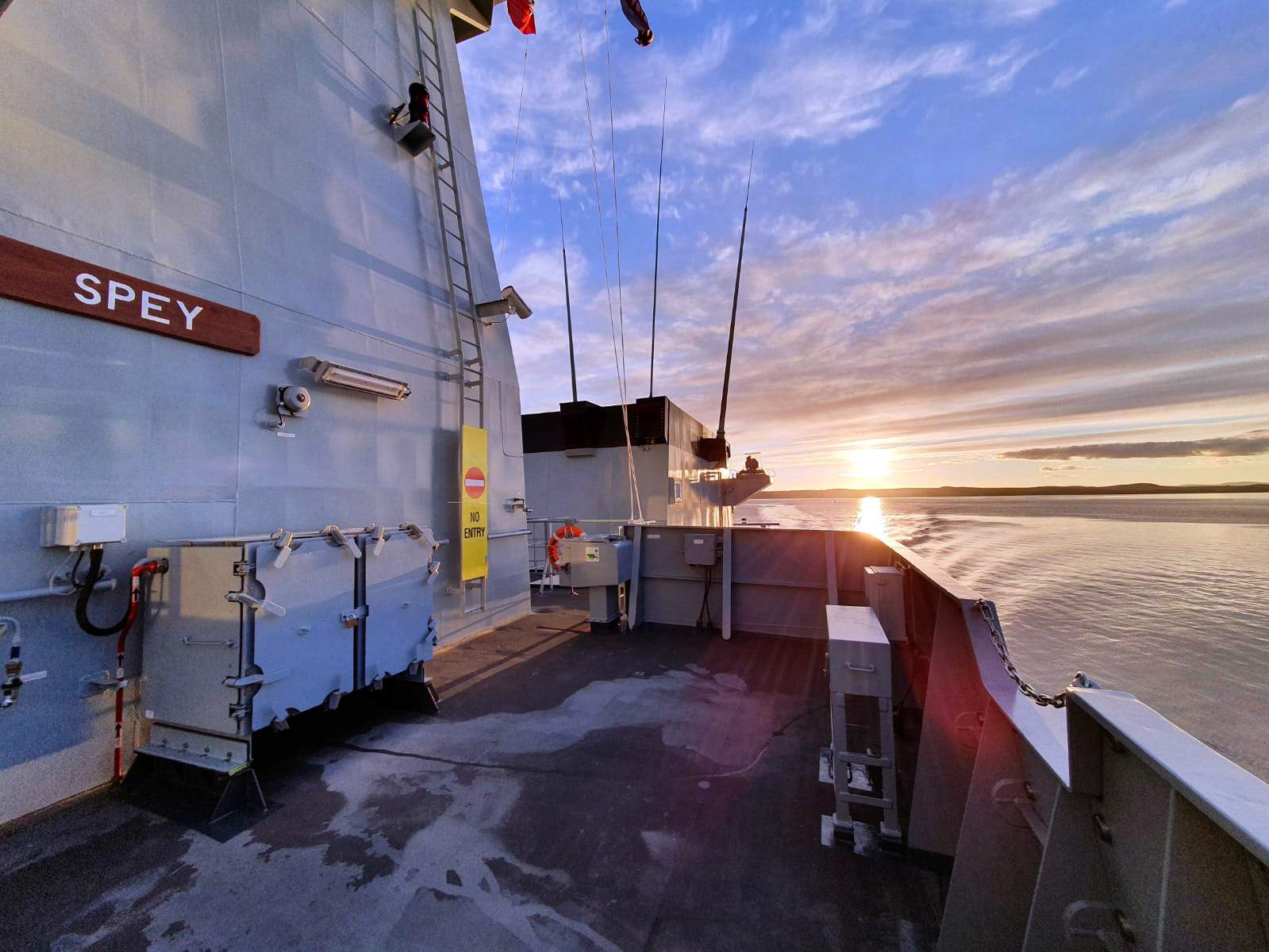 The fifth and final of Britain’s next-generation patrol ships will make her debut in Portsmouth before the end of the month after successful trials.

HMS Spey is undergoing fine-tuning and final tweaks following an intense ten-day workout around the Firth of Clyde and waters of western Scotland before preparing for a long-term mission thousands of miles from the UK.

The 2,000-tonne patrol ship is at the vanguard of the Royal Navy’s ongoing programme of stationing warships around the world in areas key to Britain’s interests.

HMS Forth and Medway are already deployed to the Falklands and Caribbean, with the patrol areas of Trent, Tamar and Spey herself yet to be announced.

For now, the ship’s company and shipwrights and technicians from BAE Systems are making the final preparations for Spey’s 700-mile journey from the Clyde to the Solent at the end of October.

As with her maiden voyage, the delivery trip will see the ship crewed jointly by Royal Navy personnel and merchant crew – Spey will enter Portsmouth under the Blue Ensign (denoting a vessel in government service, rather than one in the Fleet).

Her trials focused largely on the basics of seafaring, testing machinery, propulsion, steering, sensors, winches and cranes, and communications.

The ship’s guns, led by her main 30mm armament – fired remotely from the operations room – were flashed up off the island of Ailsa Craig against a giant red ‘killer tomato’ inflatable target.

Spey also encountered one of her first-generation River-class sisters, HMS Mersey – although she had to slow down from her regular 24kts speed to allow the 17-year-old fishery protection vessel to keep pace with her.

Blessed with perfect weather conditions, all trial serials were completed on time and met the high standards demanded of them – much to the delight of Spey’s first Commanding Officer, Lieutenant Commander Ben Evans.

“It was great to see how the ship performed at sea,” he said.

“These trials allow the ship to really be put through her paces for the first time, and we were able to witness first-hand how the last of the five brand new Offshore Patrol Vessels performs.

“It has taken a lot of planning and hard work to get to this point, made especially difficult due to the ongoing pandemic, and I am thankful to everyone involved for getting us to this milestone.

“Everything has been conducted with safety in mind and I am really pleased with the results. Next stop: Portsmouth!”

Once in Portsmouth there will be further trials and training, the ship will be formally transferred to the Royal Navy and commissioned, before being ready for front-line operations by the early summer of 2021 so she can take her place alongside her four sisters.

She’ll also foster closer ties with her affiliated county of Moray in Scotland – the river Spey flows through it into the North Sea – and its principal town, Elgin.