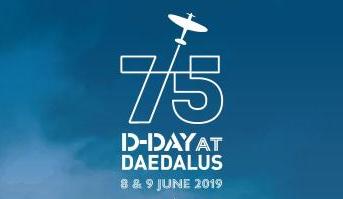 An event to mark the 75 th anniversary of the D-Day landings is now planned to be a two-day event to reflect the importance of Daedalus in this historic event.

Fareham Borough Council are proposing to extend the event to last a whole weekend on Saturday 8th June and Sunday 9th June and want the whole community to come together to mark the occasion.

Solent Airport at Daedalus is the perfect place to stage celebrations. It was the busiest airport in the UK on D-Day with more than 400 aircraft deployed - the largest number from any UK airbase.

Now the Council is planning an event that will give the site the recognition it deserves in Fareham. Aircraft will be a key feature of the weekend but there will also be fun fair rides, children’s activities, market stalls and a performance stage and arena. Tickets for the family event will include limitless use of fairground rides for children.

Council officers are currently busy planning the huge scale event and further details about ticket sales and attractions will be announced in the coming weeks. Anyone who wants to join in the D-Day events should email leisure@fareham.gov.uk to be part of the celebratory weekend. Chairman of the Daedalus Steering Group, Cllr Trevor Cartwright, said: “Daedalus was hugely significant on D-Day so one day didn’t seem enough to mark such a historic event.

“We have a vast amount of talent in Fareham which we want to showcase, so I would urge people to get involved and get in touch with us. The Council are working hard to put plans together as quickly as possible and we’ll keep people updated about ticket sales and attractions. It’s going to be an incredible event and one which will be remembered for years to come so put the date in your diaries and let’s make this a weekend to remember.”