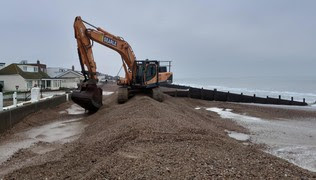 During the winter period, South Hayling Beach has felt the full force of several storms which have had a damaging effect on the coastline.

To help to reduce the risk of flooding and additional coastal erosion, emergency beach recycling work on the coastal defences has started at Eastoke. Between the Coastguard Hut and Gunner Point, beach shingle is now being extracted and deposited in front of the properties along the Eastoke frontage.

Beach recycling from Gunner Point began on Wednesday 17 February.  It is anticipated to last up to 10 days, dependent on the weather and working conditions.

To manage the work effectively and safely, the West Beach car park is being used for the works and will be closed off to the public at the road gates for the duration of the repairs. Work will be ongoing between 7am and 7pm during the week, and the car park will be opened at the weekend if it is safe to do so.

The essential work at Eastoke started on Thursday 4 February. As the project has progressed the need for additional shingle has been identified which has extended the task. The shingle along the front naturally moves from Eastoke towards Gunner Point throughout the year and recycling of this material is carried out to keep the shingle in the beach system, and to reduce the need to bring in more via the road.

Councillor Leah Turner, Cabinet Lead at Havant Borough Council for Coastal Communities, commented, ‘The recent high swell events have added increased pressure to the defences at Eastoke. The rapid response to these critical challenges has been really well co-ordinated by the project team.’