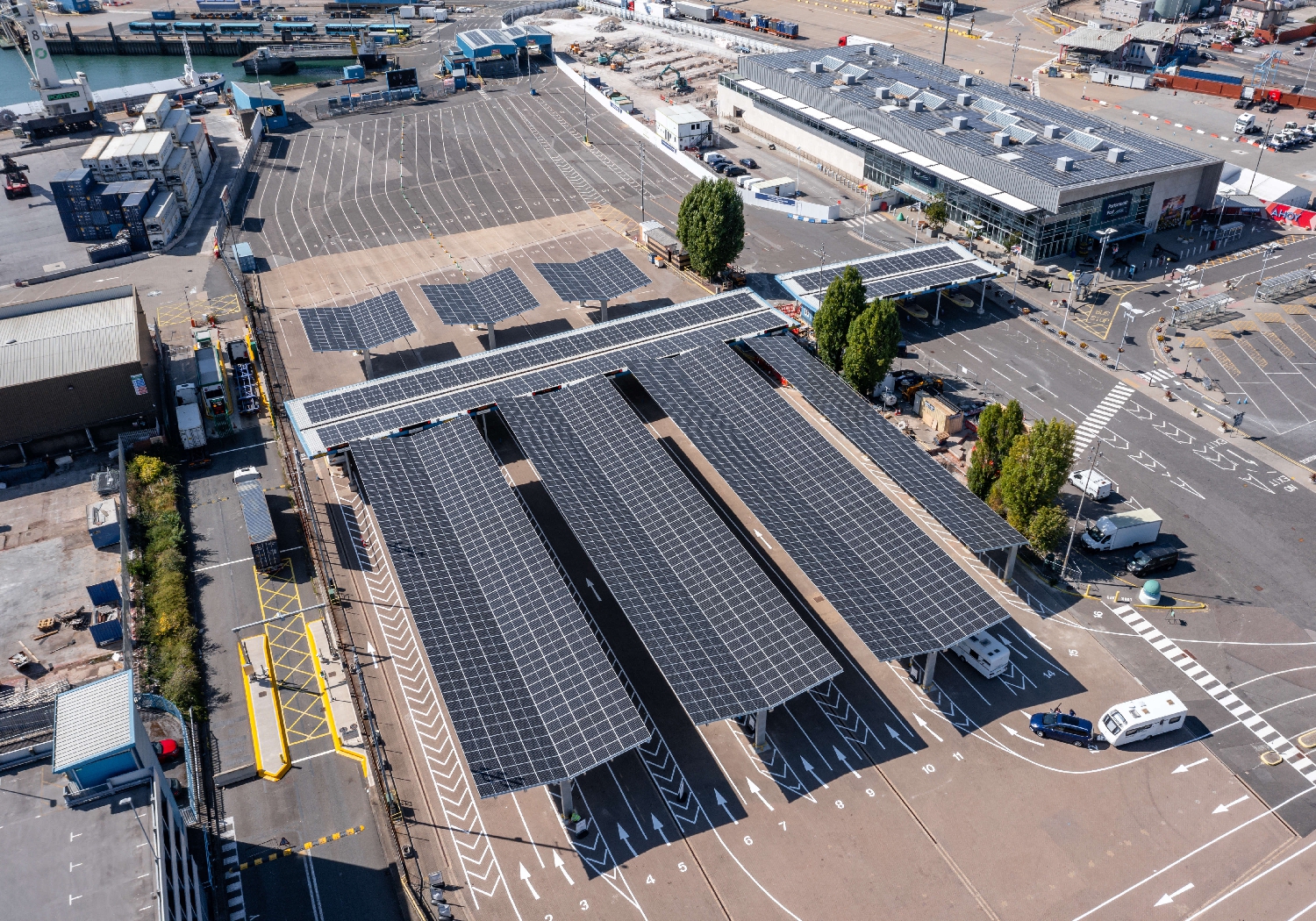 The installation of a ground-breaking solar and battery system at Portsmouth International Port has reached a major milestone. The scheme, managed by Portsmouth City Council's in-house energy services team and installed by Custom Solar

The project began in February 2022 and incorporates roof-mounted solar panels across a number of buildings, a large battery and solar canopies.

The project has broken new ground for the council and in the national context. It is the first UK port to have solar canopies, and will have a mega-watt sized battery installed as part of a renewable installation.

The power produced by the 2,660 solar panels will contribute around 35% of the site’s power; a significant step in Portsmouth International Port’s ambition to be the UK’s first net zero carbon port.

It's all part of an integrated approach that will also help the port offer shore power for smaller ships, without having to take extra power from the local electricity grid.

When completed, the 1.2 megawatt peak system, will be the largest solar and battery installation to date across the council’s portfolio of renewable generation systems.

As well as generating carbon-free power, the solar canopies will provide shade for cars waiting to board ferries; allowing them to stay cooler for longer, without having to run their engines. 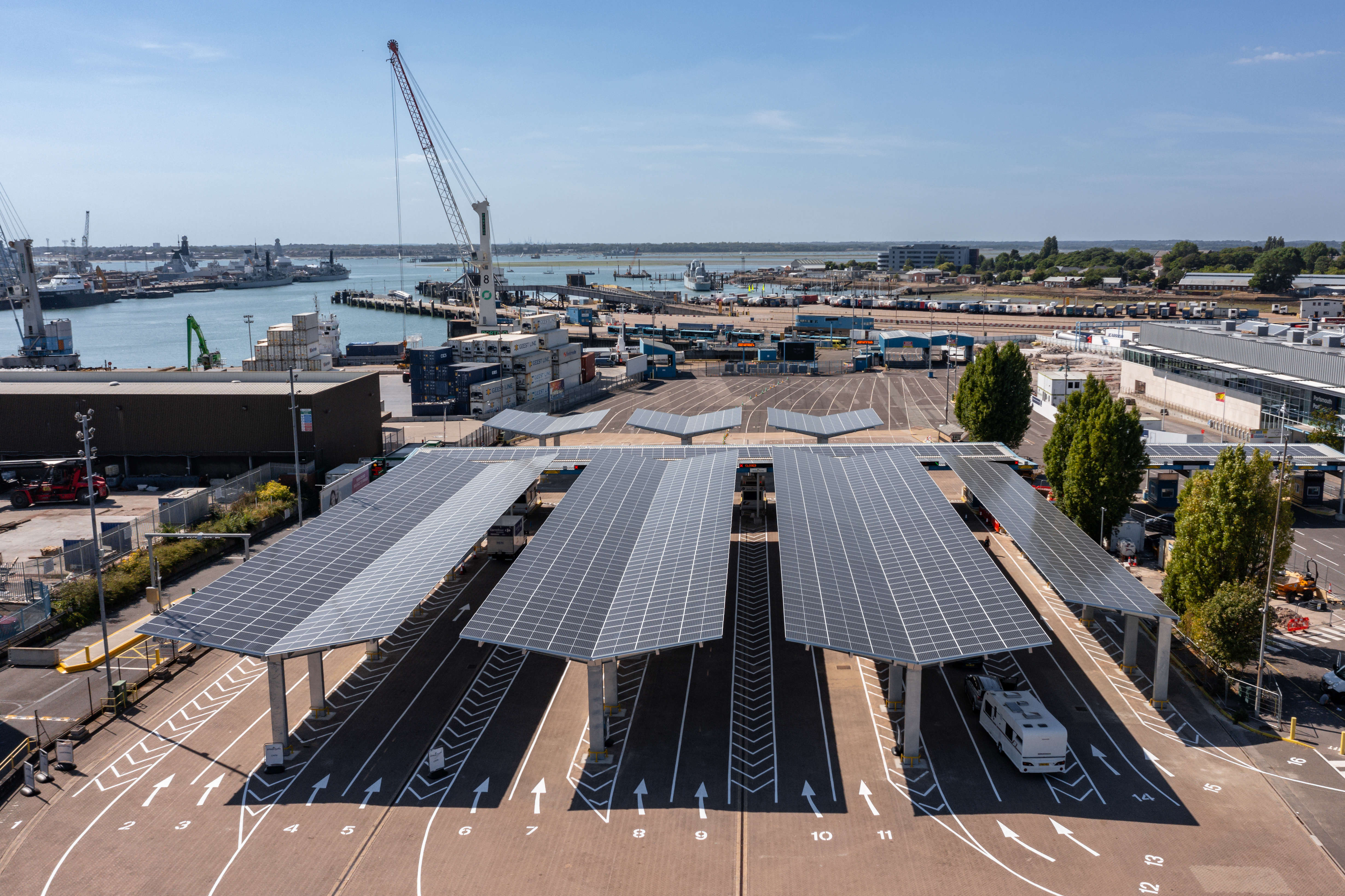 The battery, with a capacity of 1.5 megawatt hours (enough to run a typical home for 4 months), will capture green power that would otherwise be exported from the site, which can be used then used at the port when needed.

The new battery will work in tandem with a previously announced battery storage pilot, which will balance services to the national grid and storing power during lower pricing periods. When complete, it is estimated that in peak conditions that 98% of the electricity consumed by the port will come from the solar and battery, combined.

Cabinet member for Climate Change and Environment at Portsmouth City Council, Cllr Kimberly Barrett, said: “It is the council's priority to support clean growth. This major milestone on this innovative project means that the project is on-track to begin generating clean energy later this year. When operational, it will reduce annual emissions by 239 tonnes at this busy site.

"We're committed to take positive action to tackle climate change, and this cut in emissions will boost our ambitions to to reduce carbon emissions across the city to net-zero by 2030".

Jerry Clarke, pilot and senior project manager at Portsmouth International Port added: “The port is owned by the people of Portsmouth, so we have a obligation to reduce the impact of our operations on the environment, whilst reaching the ambitions set out in our 20 year Masterplan.

“Combined with other sustainability initiatives, it will help us achieve our ambition of reaching net-zero carbon by 2030, and becoming one of the UK’s first zero emission ports by 2050”.

The work is the latest in a series of solar and battery projects being managed by the council’s in-house energy services team. The team procured Custom Solar after a competitive tender exercise through the council’s recently established PV and Storage framework.

Gary Sucharewycz, CEO of Custom Solar, said: “We are incredibly proud of the progress that has been made on this groundbreaking project. It has been a perfect amalgamation of solar innovation and engineering ingenuity.

"The project will certainly be a landmark moment for UK ports as Portsmouth International Port will be one of the first to install a solar carport canopy system. We are extremely excited to finalise and showcase the project in its entirety. “ 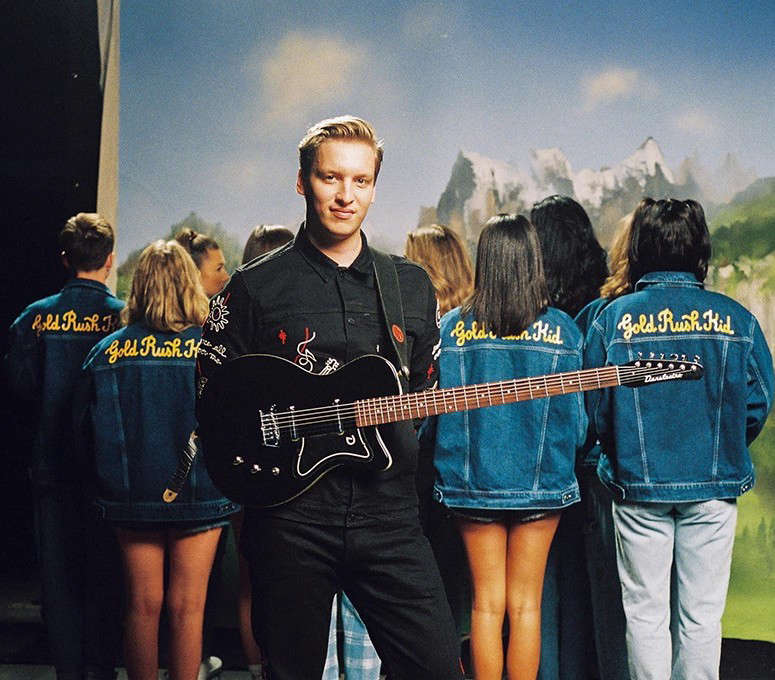